In March, I finally understood the expression of “race day jitters”; this was my first true mountain bike race, Pick Your Poison XC, hosted by SORBA Chattanooga. Days before the race, people were giving out so much advice that I was completely overwhelmed with information and beyond nervous. The second I lined up for the start I remembered hearing someone say “whatever you do, take the hole shot.” CLEARLY I had no idea what that was and needed it explained to me (being the first person to enter the woods at the start of the race), but when that timing whistle went off I gave that race everything I had. I ended up getting that hole shot and coming in 2nd place. Naturally, this started the racing bug, and I was only five months in to riding on a regular basis; I had a lot to learn.

Then came the experience of my second race, SERC Series at Tsali, and where the lessons really started. I knew due to the pre-ride that I had to get my place before the hole shot. These trails on the Left and Right Loop are not easy to pass on as a beginner. Two miles in while climbing/descending the gravel start, I was working my way into third position when my front tire was clipped by another rider, intentionally. Second lesson in MTB racing, hitting gravel at 20mph (yes, I checked my computer) was an awful experience.

After I picked gravel from my knee and elbow, I took at few minutes to decide what I was going to do. I had two options, quit or just finish the race. My bike was slightly damaged and I was in pain and bleeding. After a few minutes of having a good scream (if you scream in the woods when no one is around, does it make a noise?) I decided to put on my big-girl chamois and finish the race. Next lesson in MTB racing: an endo which landed myself in a briar patch. I recall commenting aloud, “Ohhh, that’s what they mean by having your weight back”. By this point I just wanted out of the woods.

In the end, I was content on just finishing, and proud of myself for sticking with it. Quickly, I realized what I wanted out of MTB racing. I went from wanting the podium to just wanting to try my best and never give up.

The next series of races I signed up for were 3-hour Endurance races by Chain Buster Racing. That attitude of “let the strength and gumption of the rider prevail” was very appealing. My season was very successful, with a podium spot at every event including a 6-hour team race with Michael Long. Luckily, no new painful lessons were learned. I did pick up on the importance of pacing myself and working on consistent lap times. This series was great for me to realize where my abilities were forming. I finished off the season strong, placing 2nd at Black Bear 20, hosted by our sponsor Scott’s Bicycle Center. 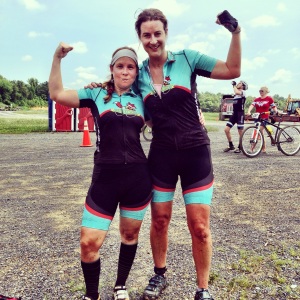 There are many ways to determine if you’ve had a successful cycling season. If I were to base my season off podiums alone, 7 out of 8, I’ve had a wildly successful first year of racing CAT 3. But that’s not how I want to determine my first season; isn’t life more than just medals and podium photos? Don’t get me wrong, I love those things as well, but for me it has to mean much more than that. I don’t want to pick up my bike and run through the stout section, I want to earn it even if it involves blood, sweat, and the occasional tears.

There were a lot of firsts this year: first time to ride a bike on a consistent basis, to ride over 20 miles (I was convinced that would never happen), to wreck really hard and wish you had reacted faster or trusted your balance, to set athletic goals for myself and see them come to culmination, first time to race bikes and absolutely love it.

While many lessons were learned, that’s not what stands out the most. The support I received from teammates, friends, and sponsors has been incredible. I am forever grateful to the kindness of the folks that came to the races to help out, to root us along, offering whatever support they can. The feeling of being part of this team is resounding assurance that I am spending my time wisely, with great people. Nothing about this racing season would feel the same without my teammates, friends, and sponsors. A big THANK YOU to every person who has encouraged my growth in cycling; you are the gold spokes in my new fancy wheel set and I sure do love my bling.

Special Thanks To: Suck Creek Cycle, you guys are amazing. Thank you for everything and for putting up with my endless questions on a regular basis! And to Road Holland and Hand Up gloves for making me look rad and keeping me warm.

The Velo Vixens are

a Women's specific multi-sport club & race team with the goal of bringing women together for sport, laughter, competition, & friendship. Based in Chattanooga, TN.